An ancient land blessed with modern ideals that remains true to itself and its visitors. 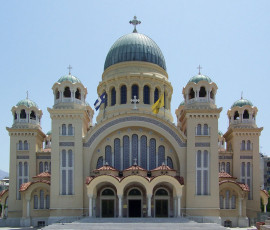 Saint Andrew’s Church in Patras: One of the largest churches in the Balkans

Saint Andrew’s Church is situated in the south part of the city and is one of the biggest churches in Balkans.

The new, majestic Church built in Byzantine style was founded in 1908 by George the 1st and was inaugurated in 1974 by the Metropolitan Archbishop of Patras, Nikodimos. It is the largest and most artistically significant church in the Balkans and one of the largest in Europe. Its construction was supervised by architect Anastasios Metaxas and following his death in 1937, by architect Georgios Nomikos.

The central cupola is 46 meters tall and is the base for a 5- meter gold-plated cross and twelve smaller ones, symbolizing Christ and his twelve disciples.

At least 5.000 people can attend ceremonies within the church.

Next to the old Church there is also the well of Agios Andreas. This place used to be Demetra’s spring and was also used as an oracle for the sick. This spot was where Apostle Andreas preached. According to legend, it was also the spot where he was crucified. 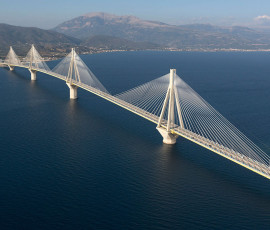 The Rio – Antirrio Bridge: The longest cable bridge in Europe

The Rio-Antirrio Bridge (named as "Charilaos Trikoupis" bridge) is the longest multi-span cable-stayed bridge in Europe with its 2.252 meters’ continuous and fully suspended deck. Its foundations lay on a seabed that reaches 65 meters of depth. This is a world record for a bridge, as well as it’s diameter of 90 meters making it one of the world’s largest bridge foundations.

Walking along the bridge is a great experience and free of charge. There are protected pedestrian sidewalks on both West and East side of the Bridge. These can be accessed through staircases on both Rio and Antirrio coast or from parking areas near the toll plaza. 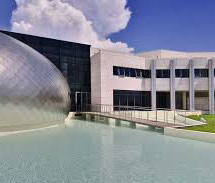 The new archaeological museum of Patras, is situated in the northern entrance of Patras. It covers a total surface of 5955 square meters with three large halls for the permanent exhibition, one periodic exhibition hall, a modern reception, coffee shop and spacious surrounding area.

The museum’s exhibits cover thee time period between 3000 B.C. and the 4th century A.D. and come from the city of Patras, as well as the surrounding areas of southern and western Achaia. The exhibition is divided into three large thematic units: Private Life, Public Life and the Cemeteries. The most prominent among the artifacts in all units are the ones dating to the Mycenean, as well as the Roman period, during which Patras reached its apogee. Patras was established as a colony of Octavian Augusts in 14 B.C. and played a significant role in history of the roman empire, reaching the peak of its affluence during the 2nd century A.D. 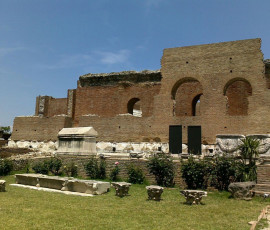 West of the Acropolis, in “Ano Polis” (upper city) you can visit Patra's Roman Odeum, which was built at an earlier date than the Athens Odeum (Herodion 160 AD).

The geographer Pausanias who visited Patra in 170 AD, writes that "it has the most beautiful decoration I have ever seen, excluding of course that of the Odeum of Athens". As mentioned by Pausanias, inside the Odeum, which was a continuation of the ancient Agora, there was a statue of Apollo, made of loot from the war against the Gauls (279 BC),when the local people of Patras assisted the Aitolians.

During the following centuries, earthquakes, wars, and conquerors, destroyed the Odeum and covered it with soil and other buildings. From the small hill that was formed, only few parts remained uncovered. It came to light once again in 1889, when excavation works took place on the hill for the proceeding embankment of the port.

A number of decades were to go by before the beginning of reconstruction works, which were completed in 1965, the year during which the Odeum regained its initial form. In the same decade, the surrounded space was turn into an archaeological area where mosaics, sarcophaguses and other ancient findings were displayed.

The Odeum consists of all main parts of the theater: concave, orchestra, front-stage, stage and back-stage, whilst the 23 rows of seats, can accommodate 2.300 spectators.

Since the establishment of the Patras International Festival, the Ancient Odeum constitutes its main stage, hosting top Greek and foreign artistic ensembles, during the summer months. 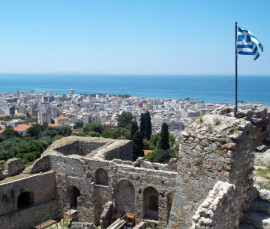 Patras Castle: A monument with diverse history and a breathtaking view of the city

The Castle of Patras was built during the 2nd half of the 6th century AD, on top of the ruins of the ancient Acropolis. It is located on a low hill of Mount Panachaikos at a distance of about 800 meters from the coast. It’s walls enclose an area of about 22725 sq. meters and it consists of triangular external compound, enhanced with towers and ramparts, protected initially by a deep moat and an internal compound raised in the North-East corner, also surrounded by a moat.

It was built by Justinian after the devastating earthquake of 551, using materials taken from pre-Christian buildings for the protection of the area and its citizens. In the centuries that followed and up until the 2nd World War, it remained in constant use for the city’s defence but also as an administrative and military center.

In the Byzantine era and until the coming of the Franks (1205), the castle was besieged by the Slavs, the Bulgarians, the Normans and other, none of whom managed to capture it. In 805 AD the citizens were placed under siege in the castle by Slavs and Saracens. Their victory, was attributed to a miracle by the city’s protector Saint Andreas, which was of great significance for the containment of barbaric raids in the Peloponnese.

The Frank crusaders, enlarged the castle, enhanced it and opened a moat on three of its sides. In 1278, it was mortgaged to the Latin Archbishop, whilst in 1408, it was conceded to the Pope for five years and leased to the Venetians. It remained in the hands of the Latin Archbishop until 1430, when it was liberated by Constantine Palaiologos, who proceeded with additaments and repairs to the walls.

It was enslaved during the years of Turkish occupation and passed into Greek hands in 1828 following its liberation by the French General Maison.

From 1941 to 1944, it remains in the procession of the Germans and was liberated together with the city on the 4th of October 1944. Since 1973, the Castle is under the supervision of the 6th Ephorate of Byzantine Antiquities. A small theater that seats 640 people is set up in the internal compound and it stages various cultural activities each summer.

The castle’s different construction phases that can be seen today, are testimony of the work realized by various occupation forces for repair and adaption to evolution in warfare technology.

The body of a statue and a mail head from the Roman years is built-in to a special niche in the wall structure. This deformed statue has taken on mythical proportions in the eyes of the residents of Patras. It became the city’s wraith “Patrinela”. According to the legend, it was a woman posing as a man during the years of Turkish occupation, guarding the city and lamenting the night when an eminent citizen of Patras dies. 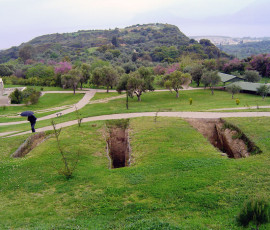 The mycenaean settlement at Voundeni is one of the most prominent sites in the so-called periphery of the mycenaean world. Excavations in the cemetery and the settlement have established that human presence here for almost 500 years (1500-1000 B.C.). Voundeni and the hill called Bortzi in particular meet all the essential conditions for the founding and the survival of a settlement over a long period of time. The settlement at Voundeni had access to fertile stretches of land on the surrounding plains and the upland areas, such that could provide self-sufficiency to the population. Substantial arable areas were exploited along the coastal zone, while the slopes of Mt. Panachaikon were suitable for grazing, hunting as well as woodcutting, both for house construction and shipbuilding purposes. Voundeni’s cemetery lies southeast of the settlement, at the localities called Agrapidia and Amygdalia. It occupies an area of 1.8 hectares, organized in a series of successive 2-4m. high plateaus and covering the full extend of the soft bedrock. N. Kyparissis was the first to investigate the site in 1923, having excavated a small number of tombs at Agrapidia. Research continued on a systematic basis by L. Kolonas during the periods 1988-1994 and 2004-2007, resulting in the excavation of 75 tombs at Amygdalia. The tombs date between the LH IIB and LH IIIC periods (1500-1050 B.C.), while some of them were still used into the succeeding sub-mycenaean period (ca. 1000 B.C.).