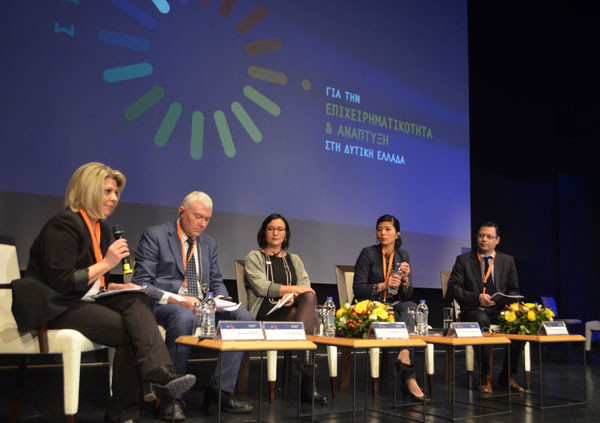 The Helsinki-Uusimaa Region and the Northern Ireland shared their experience of being European entrepreneurial Region and the work of iEER in Patras, the regional capital of Western Greece on 15th of December. The high level international conference on Entrepreneurship and Development was officially opened by the President of Greece, Prokopios Pavlopoulos, who stressed the needs for strengthening alliances and cooperation in Europe.

The region of Western Greece was awarded the title of European Entrepreneurial Region for the year 2017 edition, alongside with Extremadura (Spain) and the region of Lower Austria. The initiative identifies and annually rewards up to three EU regions or cities which present an outstanding, forward-thinking and innovative entrepreneurial and SME policy strategy. Helsinki-Uusimaa and Northern Ireland, were invited by the Region of Western Greece to share their experience and progress made in the past years as a European Entrepreneurial Region.

“The pursuit of being an entrepreneurial region is an everlasting journey for the Helsinki-Uusimaa region. We are thus pleased to continue this journey through the iEER Interreg Europe project and work with nine other European regions and the EER network to develop better regional policies for entrepreneurs”, addressed Christine Chang, head of the iEER Interreg project from Helsinki-Uusimaa Regional Council.

“The label of EER has opened the possibility for Northern Ireland to connect with the world. Furthermore, we are extremely delighted that through the work and being part of the iEER boost, we are forming a more effective and connected entrepreneurship ecosystem in Northern Ireland”, added Derek McCallan, Chief Executive Officer of Northern Ireland Local Government Association.

At the opening address, Apostolos Katsifaras, Governor of the region, stressed that the success of EER year in Western Greece was strongly supported by the Alliance for Entrepreneurship and Development in the region which is an informal partnership of nowadays 32 stakeholders from the region. The alliance works to boost the entrepreneurship in the region. Actions include establishment of an SME support office, the provision of information about the EU fundings, the setting up of a microcredit fund or the organisation of seminars and trainings on entrepreneurship, among others.

In addition to Helsinki-Uusimaa (EER 2012) and Northern Ireland (EER 2015), the three-day international conference was also attended by representatives of other EER regions, including Extremadura (EER 2017) and Central Macedonia (EER 2018).