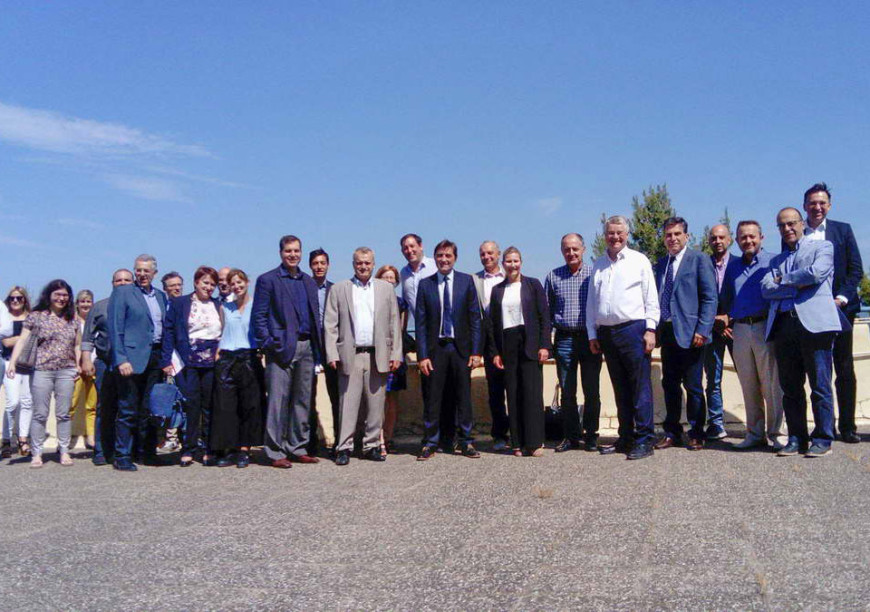 "You must feel proud that in such a difficult time for your country, the Region of Western Greece managed to implement such a demanding action plan for which it was awarded the European Entrepreneurial Region 2017 Prize". With these words, First Vice-President of EU Committee of the Regions, Mr. Markku Markkula, rewarded all the initiatives and actions undertaken by the Region of Western Greece and added: "Continue with the same pace. Do not be complacent".

Mr. Markkula was the head of the evaluators who visited Patras on Wednesday 30 May 2017 and made a series of contacts with the scientific and business community as part of the evaluation of the actions implemented by the Region of Western Greece (RWG) as European Entrepreneurial Region 2017 (EER). He explained that it was his personal wish to come to Patras for the final evaluation, as he had handed over the EER Prize to the RWG, while it was the second time he visited the city within a year. Mr. Markkula was one of the main speakers of the International Development Conference titled "Alliance for Entrepreneurship and Development in Western Greece", held in Patras on 13, 14 and 15 December 2017.

"Entrepreneurship in the Region of Western Greece has surpassed the regional limits and reached a pan-European level at a time when our country was recording negative performance. Our distinction as entrepreneurial region is a challenge and a call for co-operation of the productive and institutional bodies to implement a model for the support of Small and Medium-sized enterprises", stressed the Regional Governor of Western Greece Mr. Apostolos Katsifaras.

"The path to a sustainable growth of the Greek economy is passing through the struggle for structural interventions in our productive mix. It defines regional policies and actions with emphasis on extravert-wise productive reconstruction", said the Deputy Head of Regional Development and Entrepreneurship Mr. Konstantinos Karpetas. To this end, Mr Karpetas, has thoroughly analyzed the integrated regional policy for entrepreneurship that the RWG has designed and implemented.

The chronicle of the award

The RWG has submitted a comprehensive Action Plan on Small and Medium-Sized Entrepreneurship and has been awarded the EER 2017 Prize by the Committee of European Regions in June 2016. It is the first Greek Region to have won such a title.

As a European Entrepreneurship Region 2017, the RWG has implemented the whole of its planning, which included a series of actions to support Small and Medium-sized entrepreneurship as well as networking of the scientific and business community. In this context, the Alliance for Entrepreneurship and Development in Western Greece (AED) Network was set up, which consists of the broader Public Administration and Local Government, the Chamber of Commerce, the Academic - Research Community, the Producer Organizations and the Trade World. Network members continue to work closely together to maximize the complementarity of actions and achieve an integrated character.

The EER’s 2017 route culminated in the major international development conference held in Patras from 13 to 15 of December 2017 with the participation of high caliber stakeholders from Greece, Europe and America.

The evaluators of the European Committee of the Regions valued all the actions undertaken by RWG. They arrived in Patras on Tuesday May 29, 2018, and in the evening of the same day they visited the Achaia Chamber, in a first contact with the entrepreneurship of the region and the efforts made towards extroversion. Director Achaia values Mr. Dimitris Papadimitriou welcomed the team and informed them about the export business activities of the Chamber member companies. He also stressed the prospect of further development of the export activity through the "Extraversion - Internationalization of Small and Medium Enterprises" program that RWG is running since the 4th of June.

The following day, European evaluators had the opportunity to be informed by the members of the ADE Network on the important steps taken in the Region to connect research and innovation with businesses, as well as the general action framework set to boost entrepreneurship.

The day started with the visit to Patras Science Park and FORTH / IEHMI, where 12 representatives of resident companies presented the ecosystem of entrepreneurship and innovation and described the results of co-operation and understanding that emerged through the ADE.

Subsequently, the Evaluation Committee went to the headquarters of SEVIPA (Association of Installed Enterprises in the Industrial Area of Patras), where the President Mr. Petros Mantas referred to the cooperation that was cultivated among the members of the Association. Afterwards, the Committee visited the CBL plant in the Patras Industrial Area and had a fruitful meeting with the Chairman of the Board the Federation of Industries of the Peloponnese & Western Greece Professor Kleomenis Barlos and representatives of the established industries at the Industrial Area of Patras.

The visit was concluded with the afternoon session on Thursday, 31 of May at the "Byzantine" Hotel where the evaluation committee assessed the information and the findings of two demanding days in Patras.

The Evaluation Committee members expressed their satisfaction for the implementation of the EER Action Plan. In particular, the head of the Committee, M. Markkula, stressed the possibility of additional funding for further actions, as there is a specific EU program addressing the EER Regions, in which RWG will have access after the current successful evaluation.